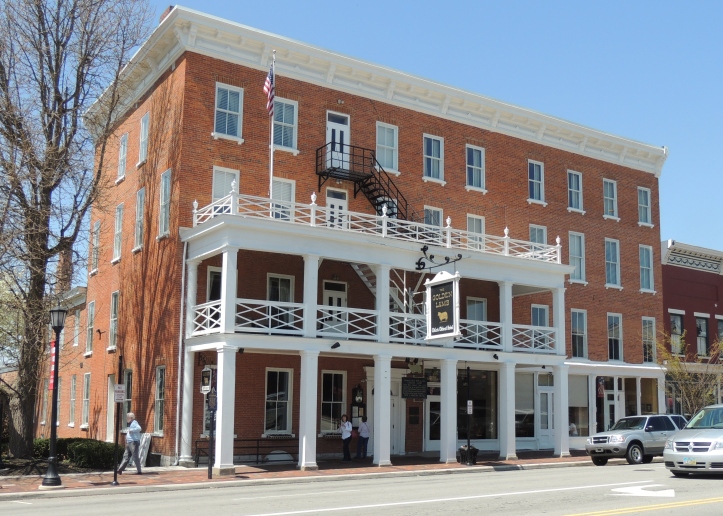 The Golden Lamb, The oldest Inn in Ohio, began operating in Lebanon in 1803. The current building housing the Inn was built in 1815, with additional floors and other renovations coming years later.  Several Presidents  have stayed there over the years, as well as writers like Mark Twain and Charles Dickens. Along with boasting a long list of famous guests over the years,  The Golden Lamb also has it’s share of ghost stories, but I guess after being around over two hundred years, that’s to be expected.

The most famous of the Golden Lambs Ghosts is Sarah…hell she still has her own room there. She was the niece of one of the inn’s managers, and though she didn’t die as a child, some believe she haunts the inn anyway. I guess she grew up there, and had her own room, which was moved at some point. So now she’s said to show her disapproval of the new room by moving pictures and stuff.

The other ghost who is believed to hang out there is Charles R. Sherman, an Ohio Supreme Court Justice who died at the inn in 1829. He is said to hang out in the hallways, and leave the smell of cigar smoke in his wake.

I’ve visited the Golden Lamb twice, but I’ve never spent the night there. In fact, on my first visit several years ago, I wasn’t even aware it was still a working inn, just a restaurant and museum type place. So while I was upstairs looking around, I made a comment about it annoying me that some of the room doors were closed, preventing us from seeing the rooms. Finally, I decided to open one up, and, of course, that’s when I learned it was still in operation as an inn. Needless to say, I didn’t open any more doors. What has been seen can not be unseen!

OH-48/US-42 S/Lebanon. Left on Main Street. It’s on the corner of Main and N Broadway Street.

This is a functioning restaurant and hotel, but I don’t think they want you there after business hours unless your staying there.