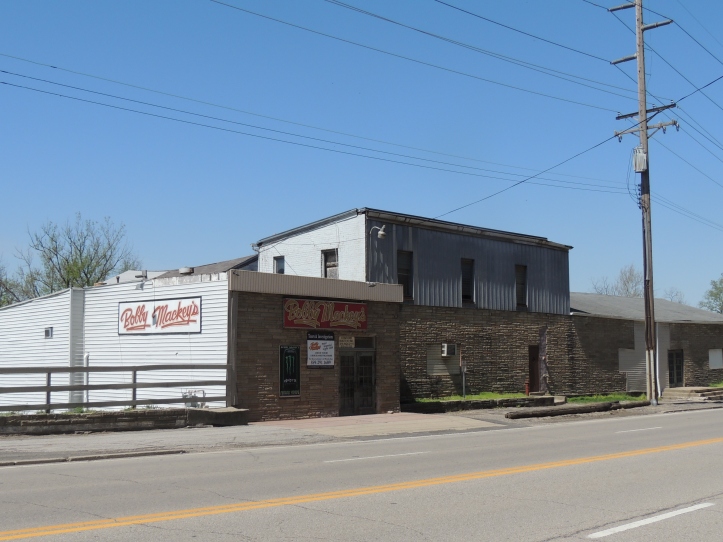 Located in Wilder, Ky, this is by far the most famous of the local haunts. It has a long history, and far to many stories connected to it to mention all of them here. There have been books written about it, it’s been the subject of several TV shows, including Unsolved Mysteries, Ghost Hunters, and Ghost Adventures, to name a few. And you can count on the local news to do a story on it just about every Halloween. But how much of what you’ve heard is true, and how much is hype?

Lets start at the beginning. I’m just going to give you the basics of the bars history and the tales around it, as much of it isn’t really known for sure, and what is out there varies depending on who you talk to. The site where Bobby Mackey’s sits was originally a slaughter house, built sometime in the late 1840’s, and was shut down in the 1890’s. Part of this slaughterhouse was a drain that led out to the Licking river, which is basically where the blood and other waste from the slaughtered animals was dumped. This drain is always referred to as a ‘well’, but no, it was used to discard waste.

Supposedly, with the slaughter house now abandoned, it became the gathering place for a group of local Satan worshipers. They would come to the empty building, and perform their rituals, said to sometimes involve the sacrifice of animals, and some say, small children, at the well. It’s at this point in the story were we come to the murder of Pearl Bryan. Her death by decapitation has been widely covered, and can be found in depth all over the net, but I’ll give you the abridged version here.

Pearl was a young woman from a well to do family from Greencastle, Indiana, who became involved with a man named Scott Jackson, a dental student attending the Ohio College of Dental Surgery in Cincinnati. They were introduced by Pearls cousin, William Wood, who was a friend of Jacksons. As sometimes happens, Pearl became pregnant by Scott, and arrangements were made by Scott and William to have Pearl go to Cincinnati for an abortion.

Pearl was 5 months pregnant when she left on February 1, 1896, telling her family she was going for a visit to Indianapolis. Instead, she travelled to Cincinnati to meet Scott and his Roommate Alonzo Walling. It turns out, Scott himself planned to do the abortion. He first tried aborting the baby by giving Pearl cocaine. When this didn’t work, he tried an actual abortion by using his dental tools. Having blundered that, and with Pearl now scared, injured and bleeding, it seems Scott decided to get rid of her all together. They took her over the bridge to a secluded area in Fort Thomas, Ky, about 2 miles from the Alexandria Turnpike, and there, they decapitated her. It is believed she was still alive when they took her head. While her body was found there, her head never was, but it’s said that Scott and Alonzo were members of the previously mentioned cult, and that they took her head, and used it as part of some ritual at the well.

Pearls body was identified by her shoes. and after they knew who she was, they were able to link her back to Scott and Alonzo through her cousin William. Scott and Alonzo were arrested, tried, and found guilty. They were sentenced to death, but were offered the choice of that, or life in prison in exchange for revealing the location of Pearls head. They refused, and were hung behind the courthouse in Newport Kentucky on March 21, 1897.  Which, by the way, was the last public hanging in Campbell County. These 3, Pearl, Scott, and Alonzo, are said to be some of the spirits that haunt Bobby Mackey’s.

Moving on, the slaughter house was eventually torn down, and a roadhouse was built there. It became a speakeasy in the 20’s, and a popular place to gamble. There were allegedly several people killed there, but their bodies were dumped elsewhere as to prevent drawing attention to the illegal drinking and gambling at the site.

After Prohibition ended in 1933, the building was bought by E.A. Brady, better known as “Buck”. Buck turned the building into a tavern and casino called the Primrose. The Primrose did well for several years, until the local crime syndicate decided they wanted a piece of the action. After much pressure, including an attempted hit on Buck, he caved and sold out to the mob. It was said that when he left, he swore the place would never thrive again as a casino. Buck committed suicide in September 1965.

After Brady sold out, the building re-opened as another nightclub called the Latin Quarter. Several times during the early 1950’s, the new owners of the bar were arrested on gambling charges. In 1955, Campbell County deputies broke into the building with sledge hammers and confiscated slot machines and gambling tables. Sounds like Bucks curse has some bite to it, and his is another of the spirits said to still reside there.

It’s during this time that the building gained what has to be it’s most famous ghost…Johanna. She is said to have been the daughter of the owner, and that she fell in love with a singer that worked there named Robert Randal. Johanna got pregnant, and decided to run away with Robert. But, her father found out about her plans, and had Robert Killed. Learning this, Johanna decided to kill her father, and herself. She went to a room above the stage, and wrote a suicide note/love poem to Robert on the wall , then attempted to poison herself and her father. He survived, but Johanna did not. She was 5 months pregnant at the time. Now she and Robert are said to haunt the building (it’s getting crowded in there).

In the 70’s, the building was called the Hard Rock Cafe (no relation to the current chain of restaurants), but was shut down after some fatal shootings on the property. Which brings us to what it is today…Bobby Mackey’s Music World. Bobby and his wife Janet bought the place in 1978, and according to legend, that’s when shit really started getting real. Again, the storied are to numerous to cover all of them (feel free to add some in the comments section), but there’s a few doozies. Janet is said to have been attacked by unseen forces there, and refused to return (she was pregnant), patrons report ghosts, headless ghosts, ghost dogs, being scratched, pushed (one filed a police report claiming to have had his ass kicked by a ghost in the men’s room), being followed home by ghosts, juke box playing though not even plugged in, miscarriages caused by ghosts, the smell of roses in the building (Johanna is supposed to have worn rose scented perfume), a room in the basement where evil faces can be seen on the walls, and on and on and on. But probably the biggest part of the story, is a man named Carl Lawson.

Carl worked for many years as the caretaker at Bobby Mackey’s. He had an apartment over the bar, so he was pretty much always there. In fact, he spent a large part of his life at that building, having previously worked there when it was still the Primrose. Carl’s story is Bobby Mackey’s main claim to fame. Carl is the one who experienced most of the hauntings, knew all the past stories, and was even supposedly possessed at one point, leading to an exorcism. It’s Carl’s story that the book ‘Hells Gate’ is based on. During Carl’s time there, he is said to have fought possession, talked to Johanna, and struggled against all the evil spirits that reside there.

So that’s the story, in a nutshell, but how much of it is true? Lets rewind and start at the beginning. Yes, the slaughter house appears to be factual, and there is a so called ‘well’ there, but what about the cult that practiced there? I doubt this is true. I cant find mention of any cult activity until the 1980’s after Carl’s story started making it’s rounds. There just no proof of it. It is possible of course, but not very likely. Which leads to the murder of Pearl Bryan. This is a true story, and can be verified easily, all except for the connection to Bobby Mackey’s. There is NO proof, or reason to believe, Pearls head was dropped into the well there (it’s not ever really a well, more like a big drain). Her body was found two miles away, and the only connection any of this has to Mackey’s is that they MAY have passed by the building on their way. It’s actually more likely the head was dropped into the river, just to get rid of it. They had hoped to conceal Pearls identity by removing the head, not offer it to Satan.

As for Johanna, I believe there’s some truth to the tale. There was a Johanna Ragan that appears to have committed suicide by poison at that location, but that was in 1914, well before the Primrose days. See her death certificate and a newspaper scan below. I believe this actual event was blown up into the tragic love story it is today. As far as her alleged lover, Robert Randal, I don’t believe he existed. Bobby Mackey’s middle Name is Randal…making him Robert Randal Mackey. I think this is just something someone came up with to add something to the tale of Johanna. And the suicide note on the wall in the room above the stage….I do not believe this was written by Johanna, but long after her death. What’s written there is actually the lyrics to a song called ‘Never’, sung by Toni Arden, and was released in the late 40’s or early 50’s. Probably just something written for some reason by who knows who, or to deliberately add to the Johanna mythos. 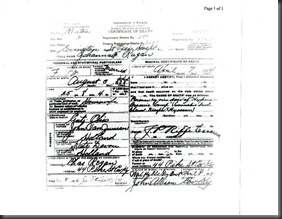 And lastly, there’s Carl Lawson. He passed away last year. I was lucky enough to get to know Carl a little bit. We would talk, and he would tell stories of the bar and it’s history. A nice guy, honestly. But Carl also had a long history of substance abuse and alcoholism. Maybe Carl believed the stories he told, maybe he didn’t, and it was for attention or to cover up his own demons. Either way, I don’t believe any of them. Carl, as I said earlier, spent much of his life there. He knew all the tales and secrets of the place, and he is also where 90% of the ghost stories came from. Without Carl, Bobby Mackey’s wouldn’t be the ghost mecca it is today.