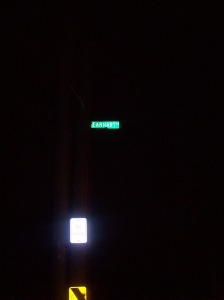 The Oxford light….the phantom motorcyclist….the Oxford ghost light….this urban legend is known by many names. It’s been around for a long time, some say as far back as the 40’s. It is said that if you drive out to where Oxford-Milford Rd. and Earhart Rd. meet, facing south, and flash your headlights 3 times, the phantom light will appear in the distance, come towards you, then disappear. This is supposed to be the headlight of the phantom motorcyclist.

The story behind the Oxford light varies depending on who you ask, but there are 3 basic variations.

1) Two teenagers fall in love, but the girls parents don’t approve. They set up a signal so that they can meet in secret. She’s supposed to flash the porch light (or a flashlight) three times to signal him to ride his motorcycle and pick her up. One night, seeing the signal, he jumps on his bike (some versions say he was drunk) and speeds down the road to set her. From there he either is hit by a tractor and killed, hits a young boy on a bicycle, killing them both. Or the most popular version has him losing control at the bend in the road, crashing through a barbed wire fence, decapitating him.

2) The second version involves a serial rapist on the loose in Oxford. Afraid of being his next victim, the girl and her boyfriend set up the same signal as a kind of call for help, in case she feels she’s in danger. From there it’s the same story, she flashes light, he comes riding to the rescue, but wrecks and is killed before making it there.

3) The 3rd says the boyfriend went off to war, and when he returned he found his girl with another man. He takes off on his bike in a rage, and you can figure the rest out from there. Not sure where the flashing light figures into this version of the tale.

What happened to the girl? The rapist? Who was the little boy on the bike? Maybe none of them ever existed? Heres an excerpt from an article in the October 31st, 1992 edition of the Hamilton Journal:

The problem with the legend is that longtime residents have never heard of such an accident. William Falk, 70, was born and has always lived in the house where the girl in the legend supposedly lived. He knows nothing of the story of the girl and doesn’t believe the lights are from a ghost

Regardless of if the Oxford Light is ‘real’, or just an optical illusion caused by car headlights from up the road, it’s still fun to test out….which we did. The headlights of the cars that are a pretty good distance from the parking spot are what we saw. The lay of the road makes them appear much closer than they really are. Often times, chasing after them leads you nowhere, as they have already turned off onto another street before you can reach them, and with the dips in the road obscuring your view, you don’t see it. But again, maybe one of them IS the phantom biker. Most say the best place to park is right where the no parking sign is (obviously why the sign is there), but others say you can do it anywhere in the area. Locals are understandably fed up with people doing this though, so try not to be a pest.

Here’s some Video of the search for the Oxford Light

Directions
Take I-275 to the Colerain Ave exit. This is US-27, take it north to Old Oxford Road and turn right. Then left on Lanes Mill Rd. Next bear left onto Schollenbarger Rd. Continue on to Hamilton Richmond Rd. where you turn left. From there it’s on to Earhart Rd. Turn left onto Earhart, and follow it till you reach the sharp bend in the road. Park on Oxford-Milford Road (by the no parking signs), facing south.