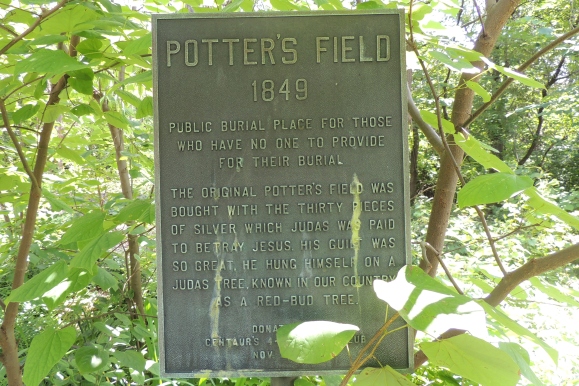 Driving up Guerley Road in Price Hill, you would never suspect you are driving by a mass grave for victims of Cholera and Tuberculosis. In fact, most people don’t know the 25 acre Potter’s Field exists.

The plaque pictured above, along with a newer one posted right below it, are the only indication that its there. Here’s what the 2nd plaque reads.

Established in 1849 and operated until 1981. between 8,500 and 10,000 people are laid to rest here. Most of the graves are unmarked but some have metal plates or wooden stakes marking the burial site. A veteran’s section was set aside and many Civil War soldiers are believed to be buried here. Records of known graves were recorded in a book kept by the County Department of Human Resources.

There are no written records of burials before 1898. The Branch Hospital for Contagious Diseases, locally referred to as the “Pest House” controlled the cemetery from 1879 to 1912. This hospital was located at the site of what is now the Dunham Recreation Center. Persons who died at the “Pest House” were buried here as quickly as possible, foregoing customary funeral services. The Hamilton County Welfare Department eventually took over operations of the cemetery after the hospital closed.

In order to preserve and protect the many graves, known and unknown, and the growth that has occurred over the passing years, Potter’s Field is now being maintained in a natural state.

While I’ve read posts by others complaining about the conditions of the cemetery, I’m guessing someone cleaned it up recently. Though it is basically overgrown with trees and weeds, I saw no trash, and many of the headstones were visible. Considering the place is about 165 years old and hasn’t had a burial since 1981, I guess it could be worse. At one time there was a  house on the property for a caretaker, the last being a man named Joseph Scott, who lived there for 15 years until the cemetery was closed for burials in May 1981.  When the cemetery closed, some family members of people who had been buried there filed lawsuits and lodged complaints about how poorly the burials were handled, and how the cemetery wasn’t maintained.

Aside from those who died from cholera or tuberculosis, the cemetery was also used to bury the poor, the unknown, and supposedly, those deemed too evil to be buried in a normal, faith specific cemetery. I wanna know what you had to do to be considered one of those people! And of course, there are those who claim this patch of land is haunted, presumably by those unhappy souls who were buried in these unmarked and forgotten graves. Can’t say I’d blame them for being pissed about it, I’m sure I would be too.

While it’s not posted anywhere, the address for the Potter’s Field is 4700 Guerley Road. The plaques I mentioned are right at the edge of the woods, near the 1st private driveway on the right as you go up the hill, which you can’t park in. In fact, about the closest place to park without pissing of the residents is about a 1/4 mile up the street at CVS. Park there and walk back down, when you get to the sign, you can sorta make out a trail in the woods to your right. Just follow it in, and you’ll find the headstones.

As far as we know, it’s open to the public until sundown. After dark, it’s probably trespassing.