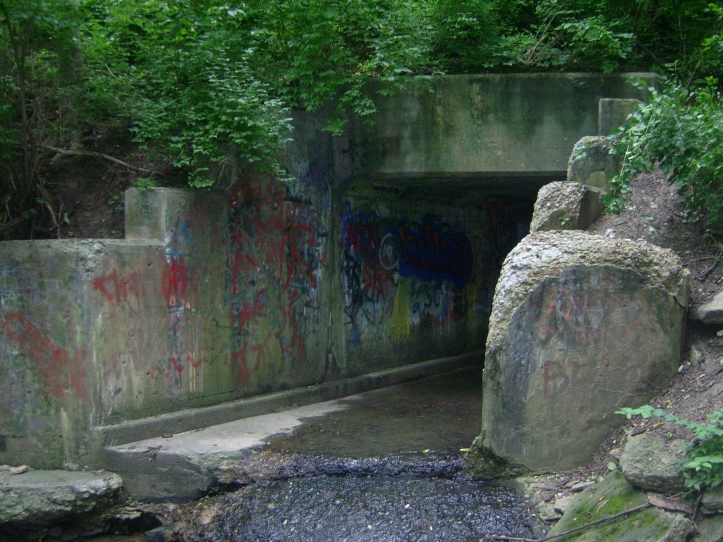 Satan’s Hollow is one of the best known, but least seen, urban legends around here. It is a series of drainage tunnels located in Blue Ash, Ohio, where a group of Satanists supposedly used to meet in some type of altar room, and conduct their rituals. These rituals included holding dark mass, animal sacrifice, human sacrifice, and conjuring. They must have been pretty good, because the legend claims they managed to open a doorway to hell and summon Satan himself. Screams can be heard at night, and there have been many sightings of various apparitions, including floating skulls and a demon, commonly known as the Shadow Man. He is some kind of hall monitor from hell, left here by Satan to guard these tunnels. The shadow man is said to appear in the form of a human, only completely blacked out, hence his name.

While these tunnels certainly are creepy, they aren’t very big. Aside from the area when you enter the tunnel system, you pretty much have to stay hunched over to get through, and they get smaller as you go. The path to the so called Altar Room is a long one, and obviously, since these are storm water drainage tunnels, they are slightly inclined, which makes moving through them even harder. So unless these Satanists are actually the relocated residents of Munchkinville, and strong ones at that, I don’t think they were dragging too many human sacrifices through here. Regardless, by far one the creepiest places around.

No. The tunnels are private property. As far as we know, its ok to be in the wood here, but not the tunnels themselves. Also, though there aren’t any ‘No Trespassing’ sign posted anywhere around the woods that we know of, obey them if you see them, property owners could put them up at any time.